In the last part, we learned how to get the latest bash, especially if you’re on a mac.

This time (and for the next few) let’s talk about how I customize bash.

Bash has a lot of settings that don’t have great defaults. For example, bash keeps track of your command history by default, but it doesn’t hold very many commands. That doesn’t give you a lot of time to fetch something from your command history before it’s lost for good. The bash history is kept in a file in your home directory, and disk space is cheap, so why not keep thousands of your past commands?

Bash also has the ability for you to create your own commands via functions and aliases. Functions and aliases are close to the same thing. While aliases are much more limited, they are easier to write, so they both have their place. I add a lot of aliases and functions to make frequently-used commands shorter and complicated commands simpler. One example is to add a shorter version of the ls command with the options I like: alias ll='ls -al'. One thing I like to note about making aliases is that I never replace the basic command itself, i.e. I never make an alias called ls, because I never want to be surprised by the behavior of the basic command on a system which doesn’t have my aliases.

Other reasons to customize bash include:

As I began to tweak bash’s configuration, it became more and more complex and my initialization files became longer and longer. Not only that, bash has multiple initialization files which are for different purposes and are loaded at different times. It can be quite confusing. If you want to know how much, take a look at this diagram of when the various files are loaded. 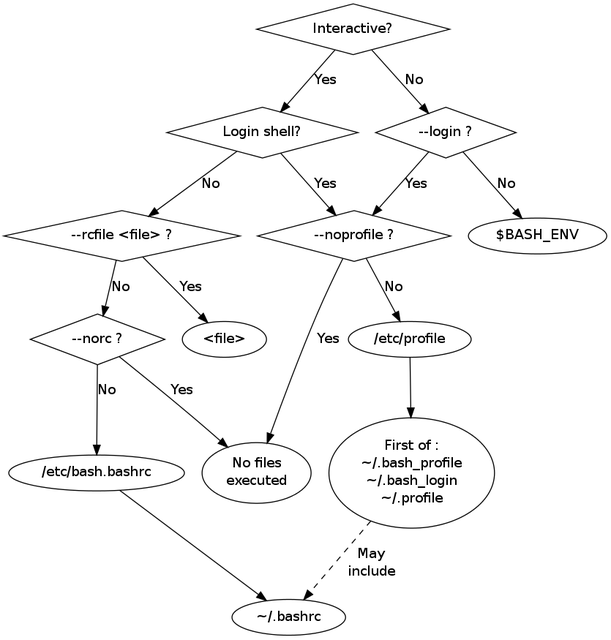 Would you believe that this diagram isn’t even complete?

In any case, there’s quite a bit to absorb. Let’s not try to take everything in one bite. In particular, let’s gloss over the stuff that isn’t that important. There are a few things I’ve worried about in my initialization files:

That’s enough for an overview. See the next part for more details.